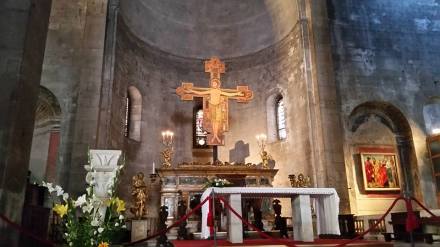 Today we decided to roll three day trips into one. We left early to take the regional train to Lucca.

Lucca is a beautiful medieval city enclosed by a renaissance wall. A renaissance wall had to take the impact of more powerful weapons, so the stone is backed by earthen walls. The benefit for Lucca is that the wall has become a walking/running/biking trail that encircles the center of Lucca. We rented bikes and enjoyed circling the wall twice, and the traffic -foot and wheel – was brisk. When we entered Lucca we came to its cathedral dedicated to St. Martin of Tours. The cathedral was closed for visitors but was open for Mass, which we attended. From the outside it is impressive, with alternating dark and light horizontal stripes and series of blind arches supported by decorative columns. The story is the architect had a contest for masons to each carve a column with the winner getting the commission for the whole church. The architect kept the columns and awarded no commission. True or not, each column is different.

Inside we were treated to a beautiful chapel at Mass (see photo) and after Mass we explored the main altar, the side altars and a free-standing marble shrine to the sacro.volto (or holy face). The legend is that Joseph of Arimathra carved a crucifix but felt incapable of accurately carving the face of Jesus. He prayed for help, went to sleep, and in the morning the face had been miraculously completed. We saw the church of St. Ferdinand which had a spectacular mural in the front. This also had an impressive della Robia image over the font. St. Michael is another impressive structure. It reflects the same striped exterior, blind arches and columns of the cathedral, even exceeding it, and haf a wonderful altar and crucifix.

We took train, retracing our steps toward Florence but stopping in Pistoia. If the name reminds you of a small handgun it is with reason. The inhabitants had a reputation for violence, against one another and outsiders. They were innovative in all sorts of weapons, and invented the pistol. Lucky we did not have this experience.

Although a walled city the walls are over so much area that you don’t get the feeling of being in a walled city. Our goal was two of the many churches there. We arrived in the afternoon to find the cathedral closed for siesta. We did find St Andrea church known for the carved pulpit portraying rather realistically the murder of the Holy Innocents. The outside was a simplified version of the striped churches we’d already seen today, but still beautiful. We doubled back and the cathedral dedicated to Ss. Zenon and James (as in Santiago). It was open by then. The prize possession is an altar piece rendered in silver (literally a ton of silver) portraying scenes from the life of St. James. It also a gorgeous crucifix
The doorway was decorated in della Robia dculpturrs, common for this area.

Our third city was Prato. Another walled, medieval city, but I will post that in part 2. 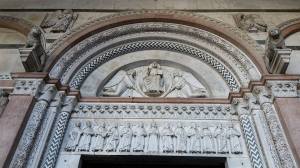 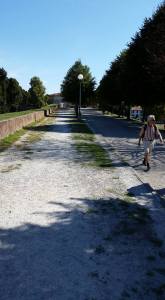 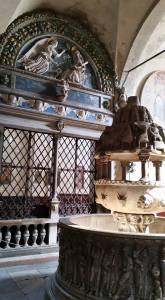 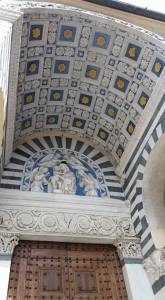 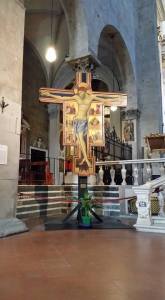 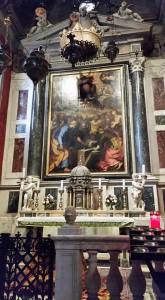